One of the top manufacturers and suppliers of industrial cooling, drying, and evaporation solutions in India is Pinakin Technology Solution. We are committed to making it simpler for businesses to operate and develop globally. Understanding client procedures and requirements is the first step in the company's design process for any water treatment process. To hasten the development and testing of innovative processes, we supply a pilot plant. It has a track record of creating superior control, fully automated factories. In terms of efficient performance, operations, and upkeep, our solutions give the client an advantage.

Our agitated thin film evaporators (ATFE) are designed to provide maximum flexibility throughout the evaporation process, enhance feed processing, and reduce waste. Due to the tailored design, a single system may be utilized to process a variety of goods under various operating circumstances. 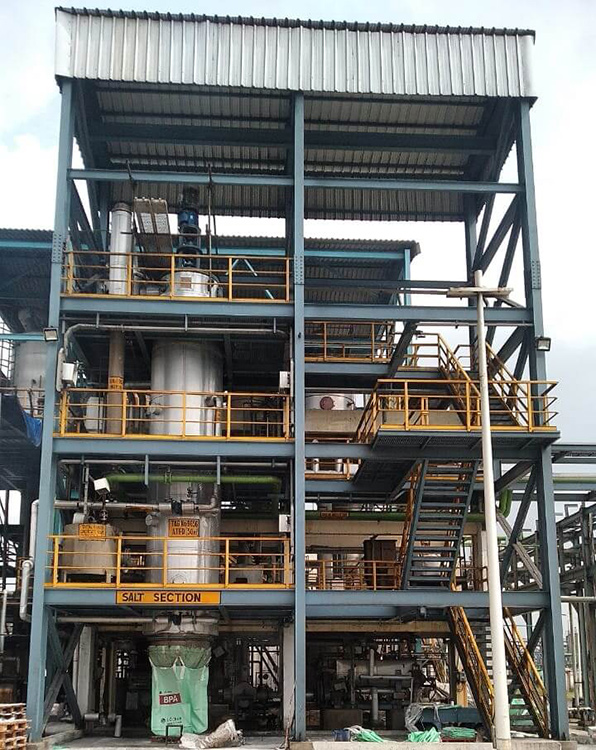 Because of their increased sensitivity and viscosity, agitated thin film evaporators are generally utilized with fluids that are challenging to manage. Two essential parts make up such an evaporator: a jacketed shell and a rotor that rotates rapidly inside the shell. The feed is placed within the top mechanism. After that, it is spread via a distributor along the shell. The feed is then spread out into a thin layer and stirred up even more by the rotor. On the heated wall, where the heat transmission occurs, the liquid is dispersed as a thin coating.

The fluid film is removed from the walls by the rotor enclosed inside the heated shell. Wiped Film Evaporator is another name for this kind of evaporator. At high rates of evaporation, the rotor also helps to keep the liquid coating on the heated surface stable. This prevents the film from breaking apart and enables evaporation in the region of nucleate boiling. Additionally, it hinders the development of an insulating vapor layer underneath the liquid sheet. Businesses may get incredibly high specific evaporation rates thanks to the way agitated thin film evaporator’s function.

Using an entrainment separator, the vapours produced by heating flow simultaneously are cleansed. In order to achieve high yields from 50% to 70% concentration feasible in one pass, the turbulence aids in complete heat transmission and mechanically assures that the whole mass experiences the process. Product deposition is prevented using agitated thin film evaporators. Temperature-sensitive items are shielded from overheating by the unit's vigorous mixing process.